Abstract selection for Oracle Open World 2013 (OOW13) completed recently, and two of the eleven abstracts that I had submitted has been accepted, entitled “Scaling To Infinity: Making Star Transformations Sing” on Monday 23-Sep at 1:45pm and “RDBMS Forensics:  Troubleshooting using ASH” on Sunday 22-Sep at 10:30am.

Lesser known, but more fun than a barrel of drunken DBAs, is the un-conference formerly known as “Oracle Closed World“, now known as “Oak Table World“.  Oak Table World 2013 (OTW13) is in the planning stages for a second year following the wild success of Oak Table World 2012.  OTW12 was cooked up at the last minute, less than 4 weeks before OOW12, and it had the impromptu energy of a Friday night kegger after a long week at work.  I had the honor of being first up at that event with a presentation on “The Fastest UPDATE Is An INSERT“, and it was a blast.  The event is going to be much bigger and more popular this year, particularly since OOW13 turned down so many excellent abstracts and presenters.

Deep technical content not suitable for OOW13?  Fine, we’ll give it an airing at OTW13!

OTW13 will once again be held at the Children’s Creativity Museum in Yerba Buena Gardens in San Francisco, CA on Monday-Tuesday, 23-24 September 2013.  The driving forces behind this wonderful event are Mogens Norgaard and Kyle Hailey, who have recruited more corporate sponsors (to be announced soon) and yes, EvDBT will once again be a sponsor.

I plan to present on “Three Types of Table Compression” at Monday 23-Sep at 9:00am.  The talk has to do with an experience I had last summer with a customer running the Oracle Demantra application, which had several quirks that prevented the use of either of the two types of table compression offered by Oracle (i.e. BASIC/OLTP compression and HCC compression).  But there is a third, little-known form of table compression rooted back in ancient Oracle versions which served the purpose, so the most of the presentation is a detailed description of BASIC/OLTP compression and HCC compression, both of which are just a prelude to a discussion about trailing NULL columns.

So, if you make it to the Moscone Center this September, then be sure to take a brief detour on the trampled path from Moscone West to Moscone South and back, and take a peek behind the carousel at Yerba Buena Gardens behind which lies Oak Table World 2013 (OTW13), and see the top-notch technical presentations that were declined for Open World. 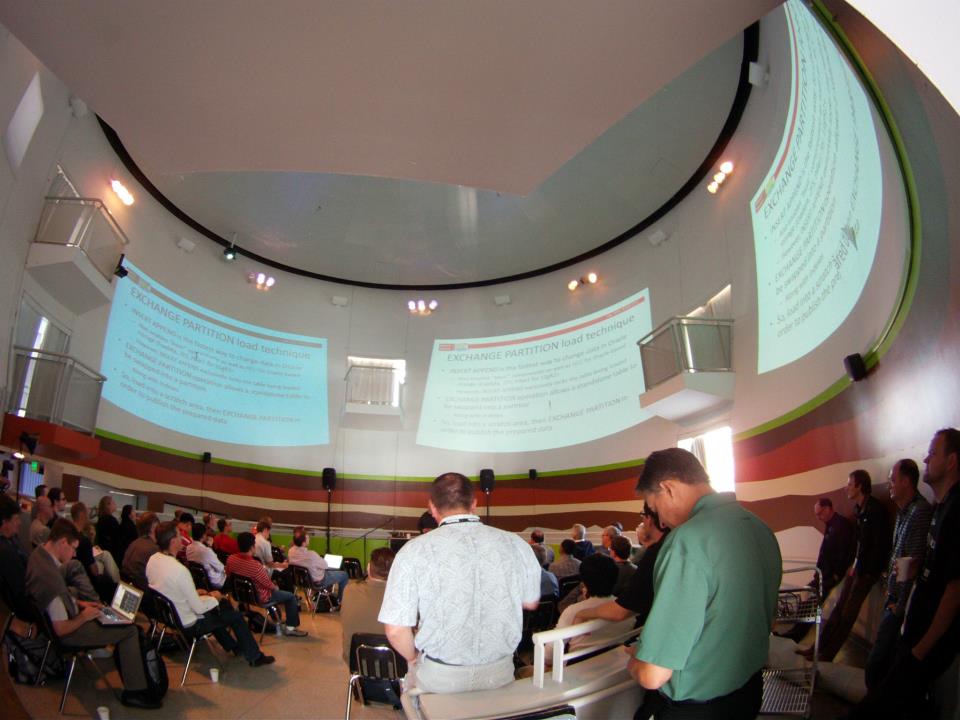